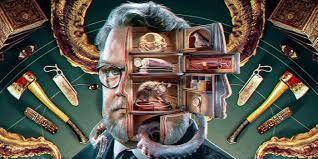 This series pleases me for many reasons: good stories with precise scripts, good production, direction, and acting.

There is nothing that hints at these stories sharing the same universe. Even though, these different stories share some familiarity, somehow.

Guilhermo del Toro is directly involved in only one of the episodes, as the author of the short story that was adapted. Besides that, he only presents each episode as a host for the series.

Still, somehow, there is unity there, not only the terror, which is the genre of all the episodes, especially the cosmic horror of H. P Lovecraft. Quite marked on most of them.

In some way this series reminded me of another anthology that marked my youth, Amazing Stories, produced by Spielberg, each episode a fantastic tale.
Both are well produced and have a great director behind it. They also have beautiful openings that after the first episodes make us eager to know what we are going to see next.

To watch an anthology is like opening excellent presents one after another.

In Cabinet of Curiosities, many episodes are short story adaptations, and that follows the example of other great anthologies like Nightmare and Dreamscapes which adapted many short stories by Stephen King.

This time, the main inspiring author was H. P. Lovecraft, with two of his stories directly adapted and all the other episodes, except two, inspired by his style of horror and his mythology.

I recommend watching, in case you didn`t already, then, go on and read the rest of my text to avoid spoilers.

The episode that I most enjoyed, concerning the Lovecraftian narrative structure, was the second one Graveyard Rats.

In this story, we see what I think is most fascinating in Lovecraft`s creations, the layers of realities and horrors.

Because he usually wrote stories about horrors extending centuries, millennia, or ages, it is common that his protagonists start by noticing just the tip of the “iceberg”, something that could be ignored or left aside without much consequence, but the protagonist will be tempted or forced to investigate it, what leads him or her to notice there is more beyond the tip.

In general, the protagonist stop being taken seriously by peers and that feeds an obsession or desire to make them know it is all true and serious.

In this episode, this happens when the grave robber notices the rats are robing corpses and even disappearing with them using mysterious underground tunnels.

Another staple of Lovecraftian horror is the shock between reason and mysteries that science can`t explain yet.

He wrote during the early 20th century when science was settling as the dominating voice in the public debate and many phenomena were beginning to be perceived by the public under this light.

But there were still many corners of the Earth yet to be explored by scientists, and many regions where some phenomena haven`t even been described, much less studied.

Lovecraft took these remains of mystery in our world and populated them with his creatures, many of them originally from the yet mysterious cosmic frontier.
These creatures manifested through “primitive” rituals or phenomena that science couldn`t explain exactly.

The protagonist, generally a person with a scientific logic of the time, usually suffers a shock when confronted by something that can`t be explained or comprehended with this logic.

Sometimes these characters find some mystical explanation for it and, even though they are shaken by it, they can live through their lives.

In the case of the graverobber, he could be like that if he managed to escape the tunnels after seeing the giant rat and not touching the catacomb mummy.

It is more common for the protagonist to dig for the base of the “iceberg”. Believing there is a rational reason behind all of that, either that or they are already losing their minds, is very common among the ones that seek reason where there is none.

Another interesting aspect of Lovecraft`s creations is the fact that great entities from other planes that inhabit the universe eons before us humans are so different than us and more powerful, that we would never be able to comprehend or visualize a single parallel for their behavior. Our minds are incapable of conceiving that and we go mad trying to do so.

Knowing that to seek reason in Lovecraftian literature is futile. The graverobber finds it out in the worst way possible.

Each time he uncovered a new layer more sinister than the ones before and it never brought an explanation, but more questions.

What he thought were mere rats, were guided by an unnatural common sense, and the cultists in the mysterious catacombs, he had only heard rumors about, were not regular madmen, but really dealt with forces beyond our understanding. One of them managed to remain “alive” for decades or centuries and was also obsessed with the medallion the thief stole from him.

Finally, the thief dies a victim of his arrogance and greed.

If he lived, he would surely be only a shadow of what he was, eternally haunted by what he saw inside the tunnels.

It isn`t rare in the universe of Lovecraft for an unsuspecting church to be the front of a fanatical group of pagans and later be revealed that under that church there was a place of adoration centuries ago. But not even the older fanatics knew that ages before that was the resting place for a creature or something like that, who eventually will manifest itself.

Layers of history, are not so different than what we see in our world, where modern cities are built on the ruins of ancient civilizations, that emerged from tribes that inhabited those lands and so on.

I could talk as much about each episode, but I won`t write individual reviews for each of them.
But, I want to know what you think about this series, in the comments, then we can talk more about it.

This site uses Akismet to reduce spam. Learn how your comment data is processed.

Scroll back to top